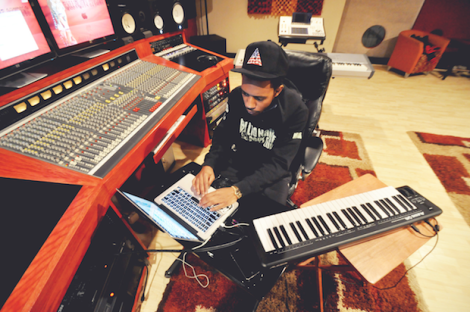 When this record was released I immediately clicked play. Anything featuring Jazmine Sullivan i’m gonna press play on the record. Anyways, producer/songwriter Key Wane discusses the creation of the “Insecure” which features Jazmine Sullivan & Bryson Tiller which is featured on the hit HBO series, Insecure. Jazmine actually freestyled the entire song. Wow. He also speaks with VIBE about the sample on “Insecure,” creativity, the importance of the piano, sampling and more.

Walk me through the process of “Insecure?” What were the creative steps like, when did you get the notification to produce the track?

I had three different versions of the beat before I ran with one. Usually, when I make beats I make at least four or five different versions of it. I’ll send you something that’s a little rough to see where I’m going then I sit with it. I don’t finish beats in a day, I have to work on it day after day after day. I probably had that beat for a year. I kept going through different versions. One version had drums to it. The way the vibe was I didn’t want it to be drowned out with drums so I kept it simple and put a very light drum track on it. I liked it, ran with it, put some keys on it, loved it. Me and Jazmine Sullivan have been working together for some years, probably since I graduated from college. We’re always sending each other records. I did the “Let It Burn” record, “Mascara,” “Dumb,” I produced a great portion of her Reality Show album. Recording with Jazmine Sullivan is so great. She’s the most talented person I’ve ever worked with as an R&B singer. When we did “Let It Burn,” I think she did it in one take. She was like, ‘It’s done!’ because she can sing really good. I’m used to being in the studio with people that’ll do take after take. She just went in there and did it. She’s amazing, gifted, blessed, she got it going on.

Check out more excerpts from the interview after the break.


Is that Pleasure P’s “Rock Bottom” that you sampled? How’d you come across that melody and what made you utilize the ad-libs?

It’s actually Jazmine singing. I took some vocals that Jazmine sang. I have a bunch of her vocals on my computer. I had her engineer send me some of her stuff. I sample a lot, so I sampled her vocals and turned it into a beat. If I played it for you, it would sound totally different.

How do you select your samples? What do you look for in that process?

It’s really the vibe I get listening to it. If I hear something in it and say, ‘This is going to be deep,’ usually when I’m listening to stuff… I really just go into it. I don’t sit and say to myself, ‘I’m going to make an R&B song today’ or ‘I’m going to make the biggest trap record,’ I don’t do any of that. I just see if it sounds right. I flip it and turn it into a crazy rap record. Usually, with sampling, I just don’t know if it’s going to be the next biggest R&B record because [Beyonce’s] “Partition” I gave to Wiz Khalifa first. I give a lot of R&B beats to rappers first. I gave “Let It Burn” to Meek Mill first. A lot of my beats usually are rap beats. It’s really who catches the vibe. I can go into the beat thinking it’s going to be a hard rap record and then it turns into being the biggest R&B record. I can go into it and it’s the biggest R&B record turning into the biggest rap record. I sent the beat of “Mascara” to Drake because I thought that would be a really good record for him. He said, ‘I love this record, this sh*t is dope,’ but Jazmine ends up making it the greatest song for a woman. I don’t have a thought when it goes into making the beat. I just don’t sit in the front of the keyboard like, ‘This is going to be the biggest rap record.’ God will laugh and say, ‘Oh you thought it was,’ and then it be an R&B record. “Insecure,” I think I gave to Sean first. When I sample I just see what works, see where it goes. I don’t pressure myself like, ‘This has to be the biggest.’